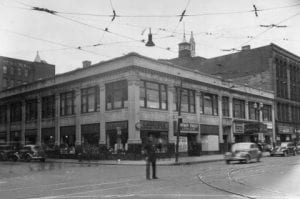 The Shean Block is a representative example of commercial architecture in downtown Springfield built during the 1920’s. This block was designed by Seabury, Inc. in 1927 for Charles T. Shean as a speculative office and commercial property during a period of rapid commercial growth in the downtown. The building presents handsome Classical Revival detailing on its Main and State Street façades. 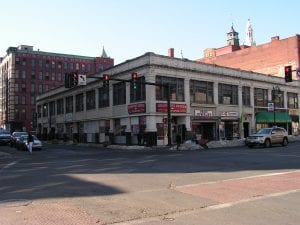 The Shean Block is proposed to be demolished to become a surface parking lot for the nearby Court Square Building. While renovation of the vacant and long-neglected Court Square Building is vital, turning a handsome early 20th century building into a parking lot at a major intersection makes no sense to historic preservation or to sensible urban design.

The Shean Block is located immediately across State Street from the MGM casino and across Main Street from the MassMutual Center, which will be a venue of MGM entertainment. Unlike many endangered buildings which are vacant, the building is currently occupied and functioning. It can be renovated for retail, restaurants, and services  for Downtown visitors, office workers, and residents.