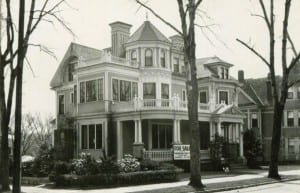 37 George Street is an 1896 Colonial Revival Style house designed by architect Frederick Newman for his own home. Newman was the architect for the Court Square Building on Elm Street, the Chicopee Bank Building at Main and Elm Streets, and the Fuller Block at Main and Bridge Streets. Over the years, the house became a  lodging house but was restored to its former glory in the 1970s.

The house was sold in 2006 to a new owner who lacked the ability to maintain the property, which was then damaged by the 2011 tornado. It is now in the process of bank foreclosure. It is abandoned and has been victim of vandalism to its architectural details as well as poses a serious health and safety hazard in the neighborhood.

The Newman House, once restored, could again be a grand single family residence or a bed and breakfast.