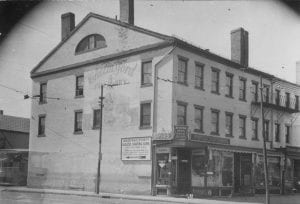 This is one of the oldest commercial buildings remaining in Springfield. It was erected circa 1830 for Elisha Gunn’s store selling coffee, rum, molasses, sugar, and spices.

In recent years, the building was vacant and deteriorated. Its owner considered it for demolition for a parking lot. It was purchased by DevelopSpringfield, a local nonprofit which has renovated historic buildings. The condition of the building has been found to be far worse than thought, and rehabilitation costs have soared. DevelopSpringfield has yet to raise the needed funding.