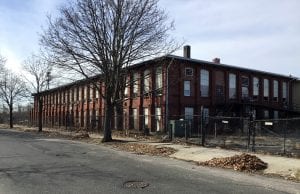 This two-story brick building was constructed in the 1890s along the Highland Division of the New York, New Haven, & Hartford Rail Road, which spurred industrial development along its line. It was then used by the Brooks Bank Note Company. In recent years, it was used by Massachusetts Career Development Institute until it closed in 2013.

The vacant building was severely damaged by an arson fire in 2016, and the City spent more than a million dollars to raze and clean the southern portion of the site. The City foreclosed on the property in 2019. Per the Office of Planning and Economic Development there are several parties interested but no firm plans for redevelopment.

There’s opportunity here for a creative developer to design for a totally new use. The sections that were demolished due to fire have opened up more space for parking or new construction, while the remaining portions of the building are suited to any number of adaptive reuses such as art galleries, office space, event space and more. Click here to see some eye opening examples of reuse and imagine the possibilities.