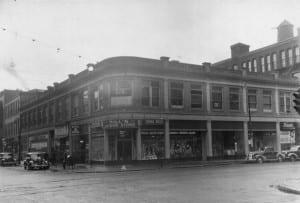 Located at the corner of Worthington and Dwight Streets, the Underwood Building was named for the first tenant, the Underwood Typewriter Co. Designed in the Classical Revival style in 1916 by H.L. Sprague a Springfield architect that specialized in commercial and industrial structures. The ground floor stores were originally largely associated with the growing automobile related sales industry found in this area of the city. The second story offices housed the Knights of Columbus until 1929 and the offices of the Eastern States Agricultural and Industrial Exposition (the Big E) between 1917-1949 during the construction of most of what is now found at the Big E grounds. Junior Achievement, which started as a separate branch of the Exposition was originally headquartered in the Underwood Building. The building relates nicely to the massing and proportions of adjacent buildings and helps define one end of Stearns Square and is an integral part of the Worthington Street streetscape.

Underwood Building today, with damaged windows from a gas explosion

The Underwood Building at 282-302 Worthington Street was damaged by the November 2012 Columbia gas explosion. Since that time the second story windows have been boarded and the owner has considered demolishing the building.

The SPT provided the owner with information on federal and state historic tax credit programs in the fall of 2019 to help finance rehabilitation of the property. Due to difficulties in his real estate portfolio, the owner is not inclined to pursue redevelopment of the building at this time.

A planning study was done in the area after the gas blast and identified the need to reposition the entertainment district into a dining district and use the existing architectural assets in the area, such as the Underwood Building, to create an urban lifestyle experience, which is critical to creating a robust district. A study by the National Trust for Historic Places found that the most vibrant areas of American cities are found where there are smaller, pedestrian scale commercial buildings, like the Underwood Building. Revitalizing this building for continued use for small retail businesses and restoring the second floor for offices or loft style apartments would help create a more vibrant downtown.